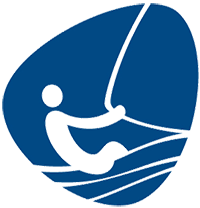 After yesterday’s 4 races, day two of racing in the Masters Division saw another three races competed.

The weather was hot once again, the air was clear and clean but the humidity soared. As expected conditions on the water were very similar to yesterday with a light breeze of 6kts pushing across the water throughout race one. And as happened yesterday the breeze started to blow after a short lunch break and two more races were held in winds around 12kts.

After a solid two days of racing the team of Philip Epps and Caitlyn Epps from Western Australia are very much in contention sitting just behind the top three. Philip expressed his thoughts about his last couple of days racing in Dapeng.

“Day one was a mixed bag for us, we had a couple of good results with a few bad results. We threw away a good position in the last race of the day, which doesn’t help our situation.

“But today was a really good day, I was able to get the boat dialed in after a steep learning curve yesterday getting the boat set up how I wanted it and I’m finally getting close to it I think. It was a good day on the water for us we had some good results that I hope, will keep us in touch.

“We were sitting in sixth position at the finish of racing yesterday and I guess it is consistency that has moved up to fourth today. The light racing on both days was light and fair, most sailors from WA (Western Australia) like a bit more wind but I’m probably the exception to that. You know the rest of the guys from WA are missing out because here it ‘s just like the port tack at Nedlands on the Swan River, I’m really liking the bay, I’m liking the accommodation and all of the staff around here are friendly and more than helpful. I’m loving it here, it’s all very good.”

Mick Butler from Jervis Bay Australia reflected on his past few days at the Worlds.

“The hotel that we are staying in is great and the beach that we are sailing off is magic and there’s a great bunch of people here and we’re all having a great time.

“This event is going along swimmingly, Jervis Bay was probably the best Worlds ever and the Masters had four races in four days, here in just two days we’ve already had seven. The good guys who sail really well are doing extremely well. I’m currently sitting in fifth and my good friend Philip Epps and I are siting on equal points.

“The wind so far has been light to medium not at all tricky, I was a bit worried about the mountainous terrain and thought that the wind would be very shifty but it has been very consistent. It has been very fair racing. There’s good forecasts coming through so I would imagine we’re going to get another seven races on the seven we have already had. If we continue along this vein everyone who has made the decision to come here will be very, very happy that they did.”

Brazilian Joao Kraemer crew for fellow countryman and skipper Mario Dubeux gave his thoughts on his time coming to China and competing at the Hobie Worlds and sitting in sixth position after two days on the water.

“It’s good to be here, the championships are very nice, the cities good and so is the hotel and the atmosphere at the event is very good.

“After seven races we are very happy with our results we have sailed very good and I would like to sail a lot more. After the first day we were in fourth place and after today we are in sixth place so we are still very happy. The spirit of Hobie Cat® events is very interesting and exciting for us.

“I am only 19 years old so this event is extremely useful for my experience in the class in the future. It is a very long way to travel to get here and I would like to thank Agua e Solo in my Brazil for helping me to get here. I am so proud to be representing my precious country of Brazil and for the opportunity to participate in the Hobie World Championships.”